One day in the early nineties when I was around eight or nine years old, my dad came home with two mysteriously acquired computers. Living in a tiny Dutch country town of about 1500 inhabitants, I wasn’t exposed to much in the way of high-tech, so this all felt very special and a bit magical. I had seen a computer before at school and on TV, but never actually used any, so this was all very exciting. I loved the way these machines looked: one was massive and square, a Commodore PET model 4016, the other rounded and much smaller (this may have been a simple dumb terminal like a Lear Siegler ADM-3A, I don’t remember). Either way, the problem was that we didn’t know how to use them, so they just sat around the house taking up space until one day my dad made them disappear as mysteriously as he’d acquired them. I remember feeling disappointed since I was excited to have a real computer. I loved playing around with the PET; seeing the screen display the letters that I pecked out on the keyboard felt special even though I couldn’t make it do anything.

Thankfully, we acquired a family computer a short time later. Another Commodore, but this time a Commodore PC-I. It was also already quite outdated at the time, being outfitted with an 8088 clone while entering the era of DOOM and VGA. At the time, we couldn’t afford anything more expensive than a second-hand decade-old machine, so it would have to do. But it ran PC-DOS and this time we got the book, so it was actually usable. Soon after, we signed up with a local computer club and received floppies in the mail every month. My love with computers and programming them was put in high gear. I would slowly type out the commands from the book and see the computer execute them successfully. I played my first video games on that computer (a Dutch version of hangman) and got my toes wet in the BASIC programming language.

I taught myself how to type in an organic kind of way. I used both my hands, index and middle fingers only, and cemented this behavior over many years. I eventually took a typing course in school once computers became more commonplace and was one of the fastest typists in the class due to my experience. Yet, I was not touch typing and didn’t even know what that was until I heard about it from my teacher. When they tried to teach this, I gave up and reverted to my original method of typing and I have been typing like this ever since.

It always bothered me that I didn’t know how to type properly. I found myself looking down at the keyboard searching for keys that I’d typed thousands of times before. There was no system to it. Sure, I was fast and my typing ability didn’t get in the way of anything, but I was making many errors and I knew that my ability could be improved significantly. So, as I was writing my final journal entry of the year, I was once again stumbling over a single letter and had to look down at my keyboard to correct myself.

I don’t usually make New Year’s resolutions because they are doomed to fail, but it was a good enough of an excuse to “fix” this shortcoming. So, thirty years or so after my first contact with a keyboard I’ll finally use it in its intended way.

The first day was the toughest of all. I am glad that I began on a holiday since coding would have been a nightmare and would almost definitely have deterred me from continuing. I spent hours on how-to-type.com going through their free lessons (no sign-ups or anything), trying to improve my accuracy. Seeing my words per minute come in around a measly 10-15 was offputting, but I could tell that this method would eventually make me a faster typer. For one thing, my hands weren’t hovering over the keyboard anymore and already I looked down fewer times.

The next few days showed real improvements, but my speed was still only a fraction of what it was when using my homebrew method. If you’re thinking about learning how to touch type, don’t worry, your words per minute will increase over time. I’m a little under two weeks in now and I’m almost back to my original speed while making fewer errors, so stick with it and give it a chance. Muscle memory takes a while to take root and you’re unlearning years of subpar habits. So stay off TypeRacer for a while and focus on accuracy because speed will eventually follow.

There are still things that I find quite challenging, special characters and numbers in particular. So much of programming is typing non-alphanumerical symbols that are out of the way and it’s taking me a while to adjust. The typing sites have practice material specifically for this (even programming), but I think it’s due to my old habit of hovering my hands over to the keys that I want to strike instead of stretching my fingers. This hovering and very kinetic way of typing has practically gone extinct as my hands remain firmly fixed on the home row.

Another challenge is the usage of my pinky fingers. With my old homebrewed typing method, I didn’t use them at all, so when a word contains Zs, Ps, or Qs, my performance drops significantly. Nevermind that almost all special characters used in C-derived programming languages on the right side of the keyboard are struck using the pinky…

A final and surprising challenge is typing my system password, which is long and contains a wide variety of characters. I had learned to type it very quickly in one particular way, so changing this over to touch typing is still not easy for me. Typing my password never took me more than a second or so, so this has drastically decreased for me.

On this journey so far, I’ve made extensive use of how-to-type.com, which has been my primary source for learning touch typing. The site is family-friendly and has a great practice section that uses quotes from books, similar to the game TypeRacer. My regimen is to put my headphones on, listen to a podcast episode, and type quotes until the episode is over. I do this once in the morning and sometimes in the evening. If I find that I’m having difficulty with a particular key, the site gives me the option to practice only the keys that I was the least proficient in, which is a wonderful feature (see image below). 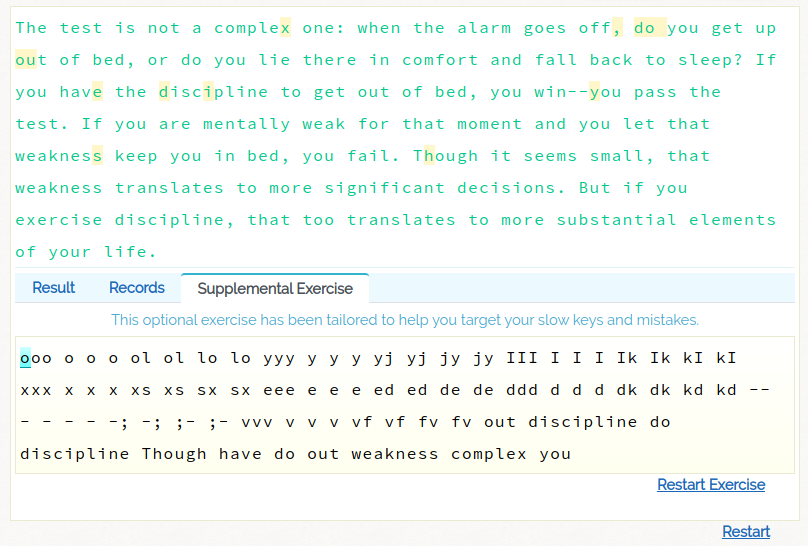 In the last few days, I have also been using keybr.com, which has a unique method of teaching touch typing. It uses statistics to train your most deficient keys and provides graphs that will show your progress over time (if you create a user profile). All of these are nice features, but I haven’t used it enough yet to give it a recommendation. It’s not as explicit in its teachings as how-to-type.com, but I could see myself switching to this as my need for lessons diminishes.

Overall, if you spend a significant portion of your day typing on your computer and use a method that’s not making you as efficient as you can be, it’s probably worth it to take a look into touch typing.